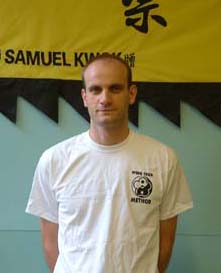 David has had a lifelong interest in martial arts but, as a youngster, lacked the commitment required to learn a style.

He started to train seriously whilst at university, taking up ju jitsu. Upon returning to North Wales, David tried several different styles before settling on Shukokai karate which he studied for 5 years reaching 1st kyu.

His training was interrupted for a six year period by marriage and children. However, in 2003 he saw a poster for a wing chun class starting at his local leisure centre which promised “no high kicks”.

David has been studying wing chun under Sifu Dave McQuillan ever since. He achieved his black sash in November 2010, proving that patience and commitment are the most important qualities needed when learning any martial art.

Call now to book your place

Please Call Me Back