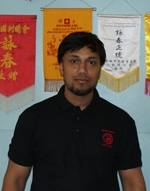 Jay is an accomplished martial artist, who has trained diligently and humbly from a very early age in the following arts: Karate, Muay Thai, Western Boxing and Judo. He was introduced to the Wing Chun Kuen system in 1994 and has studied in various lineages, but predominantly with his first teacher Sifu Simon Lau in London. This is where he endured intensive conditioning training and developed a rooted structure . In the year 1998 he was honored with the title of ‘Sifu’ and became a fully certified instructor.
Personally training with Master Billy Davidson has helped him primarily focus on the classical art of IP Man’s teachings and ideologies of life. Jay has the utmost respect for Master Billy Davidson for completing his skill set and aspires to follow in his footsteps. Now a senior member and registered Instructor of the CMA, he continues to adhere to maintaining the highest level of good practice.  A famous proverb which he thrives to adopt, ‘Give a man a fish and you feed him for a day. Teach a man to fish and you feed him for a lifetime.’