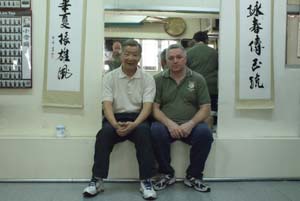 Sifu Ip Ching is the youngest son of the late Grandmaster Ip Man and was born in Foshan, China in 1936.

Many martial art masters lived in Foshan whilst Sifu Ip Ching was growing up, but he didn’t start his Wing Chun training until about the age of 11 or 12 Under the close guidance of his father.

When Sifu Ip Man left China for Hong Kong in 1949 he took his eldest daughter with him, sadly leaving behind his sons and other daughters with their mother in China. Although practice of any traditional Chinese Kung Fu was banned during the Cultural Revolution, Sifu Ip Ching was determined to keep up his training during this fathers absence. So he would stay up late at night to practice his forms right up until the day he left China for Hong Kong in 1962. (After graduating from high school and attending college in Canton China).

When arriving in Hong Kong, Sifu Ip Ching was reunited with his father and was very happy to resume his Wing Chun training. (In the past it was tradition that when a family had a skill or trade, it would be passed down from generation to generation, from father to son).

Form 1964 Sifu Ip Ching started to help his father teach a lot of his later students.

sons, Sifu’s Ip Ching and Ip Chun to film him demonstrate Sil Lim Tau, Chum Kiu and the Wooden Dummy techniques. Knowing he had not long to live he was worried that some people might claim they were tough secret techniques or modify the forms. At the time Grandmaster Ip Man wanted to film the whole system, but seeing he was in great pain they suggested he finished it at a later date, but sadly he died. The film was then entrusted to his two sons.

After his father’s death the house was passed on to Sifu Ip Ching who still lives there today. At this time Sifu Ip Ching was only teaching Wing Chun part time due to his successful manufacturing company he ran.

In 1994 Grandmaster Ip Ching decided it was time to retire and started to teach Wing Chun full time at the Ving Tsun Athletic Association and privately at his home.
Since his retirement Grandmaster Ip Ching has been invited all around the world to teach his Wing Chun and to talk about his late father’s teachings. Sometimes practitioners of Wing Chun from across the globe come to his classes at the Association in Hong Kong to train with him and his students.