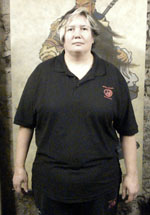 Pam became interested in martial arts in the early 1980’s. After extensive travelling around the world and training in various types of martial arts (Judo, Shotokan, Jeet Kune Do, Kali/Escrima, Muay Thai Boxing and Grappling). She moved from London to North Wales and began training in Wing Chun Kung Fu with Sifu Dave McQuillan, Senior Instructor of North Wales. With a strong desire and passion for martial arts, She entered into an Instructorship Program for Wing Chun, offered through the Ching Mo Centre in Manchester, and began extensive training with Sifu Dave McQuillan and Master Billy Davidson on a weekly basis.  Pam passed her Instructors certificate in April 2010 her goal is to continue her training while teaching and sharing the art of Wing Chun with others, in an effort to help improve her students quality of life.